I love the soft adventures of camping. Sitting next to a campfire, drinking my morning coffee, reading one of Stephanie Plum’s adventures in a Janet Evanovich mystery. That’s my kinda day! My two Eagle Scouts are looking for a challenge, an adventure.

Today we had a teachable moment in Red Rock Canyon. Go to the northern boarder of Montana, cross at the summer-only boarder crossing, and head to the very north end of Waterton Peace Park. This parking area has recently been repaved, the restrooms are vault toilets. It’s river water or a bring you own kinda place.

So it’s noon, we’re at the trailhead heading out on a hike, and here come a mountain biker gal busting into view yelling for a satellite phone to call 911. There are 50 people or so who hit their cars looking for a signal, but no one has one. No one has a satellite phone, and there’s no ranger phone at the new restrooms. We are 30 minutes drive from a Ranger station, and she has the only bike. Her biking partner, who fell and can’t mover her legs, is 8 km out in the trail. That’s five US miles. One guy says he’s a doctor, and sounds like he’s Canadian. He headed out on the trail (using her bike) to find the hurt biker. The other gal heads to the ranger station in her car. There wasn’t much we could do but prayer for her.

One hour into this, we are having lunch and the ranger comes in with the original biker. We hear him tell her there isn’t much we can do but wait. Half an hour later the helicopter flies in the rescuers and drops them on the trail using a long line between the trees. Two and a half hours from the time the biker yelled for 911, we see the injured gal and her bike, dangling from the chopper, fly over the canyon we are in.

They set her down in a field that had a rescue team ambulance. When we left at 3:00 PM, we passed the hospital transport ambulance that would get her the medical attention she needed. What an eye-opener. I had read that this was not the place for family biking, and today we saw why. What an amazing rescue!
﻿ 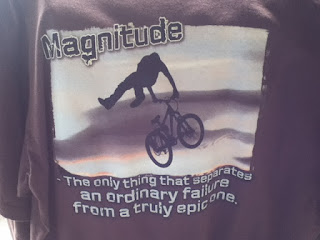